Cabin fever is a real affliction…as evidenced by one being mad at the walls around them.  Why?  Part of it had to do with the interior wall of my bathroom crying like some blessed Madonna statue.  I thought about just hanging an icon in the bathroom instead of stressing about the new roof leak.  Yeah, just light a few candles and call it a religious experience.  I felt the whoosh of the donation basket ghost on by as I tallied the expense of a holy repair man.

Plan B, get out and support other artists.  After padding the baseboard with a large absorbent towel I realized I could still get to one thing on my local list of artsy things to do.  Drat the wet rat…Yesterday the weather was so wet and bad mannered that it dropped a downpour accompanied by emergency alerts for tornadoes.    After one day of that, and wiping the tears off my bathroom interior wall…I needed to get out.  Destination Butterfield Garage.   I could show support for Jim Smith and his SteamPunk Exhibit.  Clever stuff.  The descriptive legend explained that the inspiration came from an old farmhouse with heirlooms from Arthur Conan Doyle.  Yes, the eccentric  man-of-scientifica provided the original inspiration for all the noodly and twisted metallic bits which demonstrated all sorts of idealistic monitoring and measuring devices.   Whimsy and science marry and shot by cupid’s arrow.  Oh great delight, there was one original preserved from the farm house which was a delightfully obsure assemblage that measured emotional stability.  I wonder if I could peg the meter with my cabin fever. 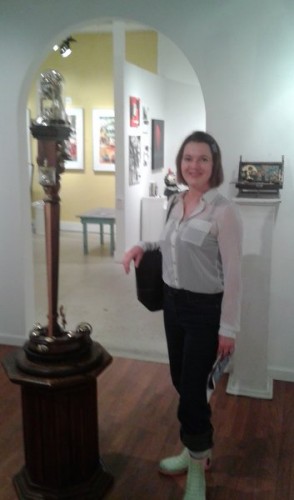 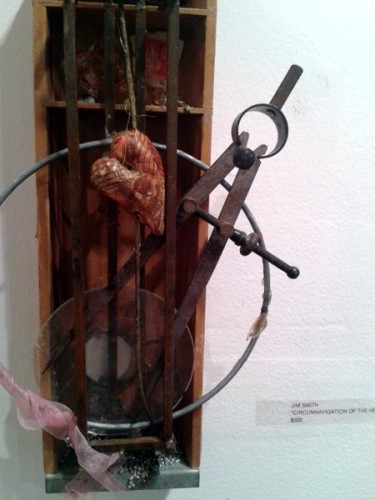