Thanks to Bonnie Edie for giving a bit of creative and pointed feedback about this project.  I showed her an image of the underpainting and she commented “why don’t you just leave it like it is.”  Her advice hit me in a big way.  I had actually stepped back and considered that the blue and red colors worked well and the faint image of a figure study face coming through the outline of the building added a bit of whimsy to a concrete jungle.  The idea of leaving it obscure, abstract and a bit open, well This generated some artistic inner turmoil (maybe a good thing because it pushes us out of the preset boundary we design for ourselves).

I’m one of those decisive and efficient people who doesn’t mind being cryptic but wants to be understood.  Consider the part Sean Connery played in Hunt for Red October when Alec Baldwin said “he’s Russian, he doesn’t take a sh** without a plan.” Maybe I deliberately push in my projects to go for the realistic points.  But I also pondered the theme of the upcoming show April 5th which is “Imagination vs. Logic.”  So why not…here goes.  Thanks Bonnie, you gotta be there! 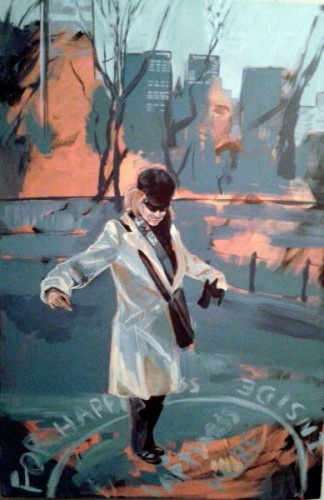